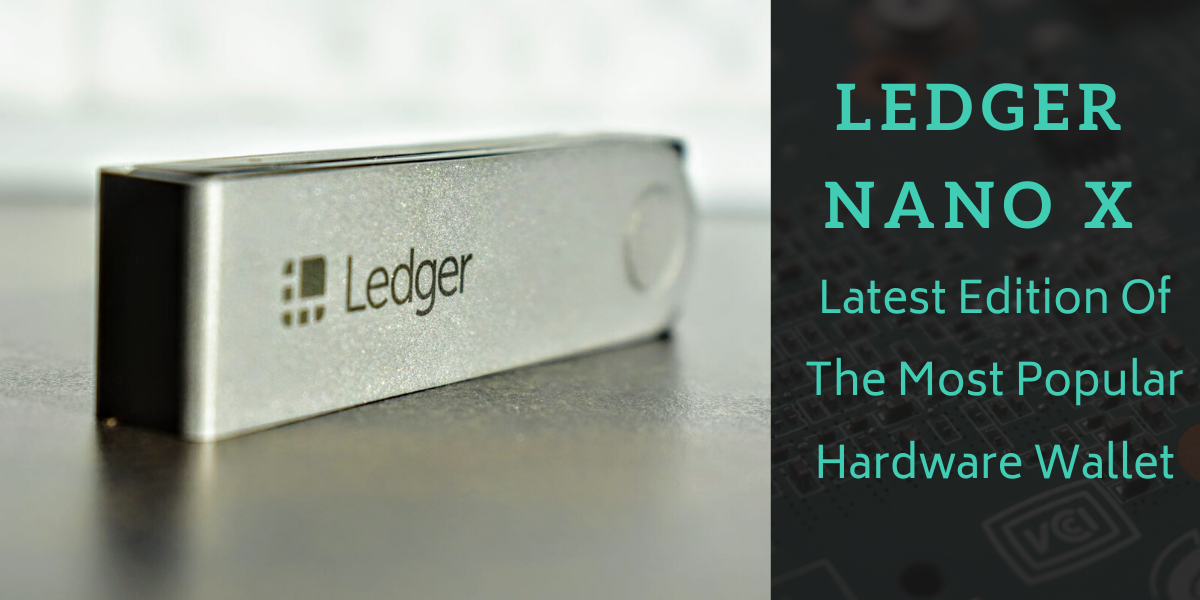 In this post, you will found out what improvements the next generation of Ledger Nano hardware wallets bring

Together with all the good features of the existing model, the new version brings significant improvements in functionality:

Let’s dive into it

Nano X comes in a cardboard box just slightly larger than the box of the predecessor.
In addition to the device itself, it also includes a cable for connecting to a computer, a strap with logo, an instruction manual, a regulatory statement, Ledger stickers and three cardboard sheets for storing seed words.

Immediately after opening the box, you will notice that the new model is slightly larger than the previous one and that it lost the side buttons on, which are now leveled with the screen and the metal part.

It is also noticeable that the display is larger and is now in line with the high gloss plastic case. The keys have a larger surface area and under pressure provide a better, distinct feel. The click is slightly more distinguished than before.

The display is much better than the old model, the readability is better, although it’s brightness is not adjustable as in the old model.
Thanks to the built-in 100 mAh battery, the Nano X operates without a cable. According to the manufacturer, the battery is sufficient for 8 hours of continuous operation.

Upon initial startup, we are greeted by a welcome screen and a well-known logo. Next, we will be prompted with a menu that further leads us through the setting process.
Like with the previous model, you need to enter a 4-8 digit PIN and decide whether to configure the device as new or do you want to recover it from a seed.

If we decide to configure a new device then the menu will prompt us with the choice of 24 seed words to be stored safely.
It is strongly advised to store seed words in an offline and secure place.
Some good seed storing solutions are described in previous posts: a Cryptosteel capsule or Billfodl cassette, or simply you can write the words on the provided recovery sheet.

After the initial setup, Nano X is ready for use. Let’s see how the most interesting feature works on Nano X – pairing with a mobile app via Bluetooth.
For this, you will have to download the Ledger Live mobile app (available for iOS and for Android devices), turn on the Bluetooth connection on your mobile, open the Ledger Live app and follow the instructions.

You will face a menu that will offer you a pairing with your device. The Bluetooth connection on the device is ON by default but it can be switched OFF within the settings.
Once the pairing is initiated, you will need to double-press the button to confirm the security code and the connection will be established.
The application will require you to create a password for accessing it. Next, you will need to install the application for each individual cryptocurrency.
Each cryptocurrency is managed through an installed application.

Due to its higher memory capacity (2MB), Ledger Nano X can store up to 100 crypto applications depending on their size. The previous model could only store twenty applications.

Since September 2019. (as of version 1.14.0), the Ledger Live application supports the operation of over 1,250 different ERC20 tokens (on the Ethereum blockchain) directly within the app.
This applies to all versions of the Ledger Live application; both mobile (iOS, Android) and desktop (Windows, Mac OS X, Linux).
This means that September 2019 upgrade also enabled users of the older Nano S wallet to manage all ERC20 tokens.

To clarify – up to now, Nano S wallet users have been able to manage more than 1,000 ERC20 tokens, but only through a third party;  MyCrypto or MyEtherWallet online wallet (as described in a previous post).
Starting from September 2019. you can do so directly through the Ledger Live app (desktop and mobile).
On the link below you will find a video tutorial for managing ERC20 tokens with the Ledger Live application:

New Nano X users will face a learning curve especially if it is their first Nano device.
In my case, the device failed to pair with the cellphone after the first attempt.
Resetting the Bluetooth settings fixed the problem and from then on everything went smoothly.
To make things more complicated there are multiple categories of cryptocurrency management applications within Ledger Live:
standalone applications and those that require pre-installation of a standalone application.
Get the complete list of applications with installation instructions here.

Luckily, on the manufacturer’s site, there are a number of instructions and video tutorials for each step, making it easier to navigate.
Lastly, you can contact customer support directly through the help form on the website.

If for some reason you don’t want to use the Nano X via mobile phone, you can use the cable to connect it to your computer just like the Nano S.

Note;
The Nano X cannot use Bluetooth to connect to a computer, for that you will need a cable.

Nano S is priced at $ 65 with shipping included and extra charge for fast delivery.

There is a special offer – the Backup Pack – a package of two: Nano S + Nano X at a promotional price of $160 delivery included.

When it comes to security it is important to note that the Nano X, like the Nano S, uses the same security element EAL5 + combined with a specially developed BOLOS operating system.
The French Agency for Safety of Information SystemsANSS (National Agency for Information Systems Security)  in October 2019. awarded wallets Nano S and Nano X CSPN (First Level Security Certificate) certifications after a series of conducted safety tests.

Nano X – the latest iteration of the best-selling crypto hardware wallet, brings additional working comfort while maintaining all the good features of its predecessor.

What can be better?

First, the previously mentioned inability to adjust the screen brightness, the lack of battery status indicators on the main menu, and the fact it can’t connect wirelessly to desktops.
However, as each new firmware version brings improvements, I believe that it will improve over time.
Whatever version of Ledger device you choose, you can’t go wrong; you will get a product of impeccable security that supports a large number of cryptocurrencies.
Since 2016 when the first Ledger Nano S was introduced it has set standards within the fast-expanding hardware wallets industry.

Photos in this post were taken with a Nikon DSLR camera.