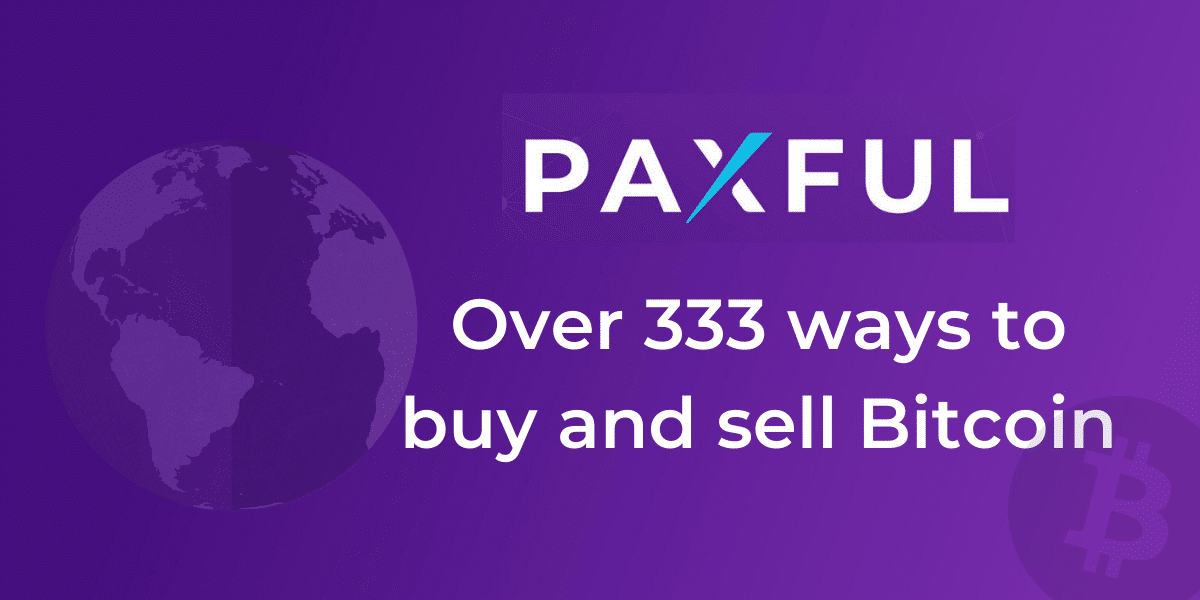 Paxful – Over 333 ways to buy and sell Bitcoin

Paxful was launched in 2015 by founders Ray Youssef and Artur Schaback with the idea of ​​helping unbanked and underbanked people to gain financial freedom.
Ivan Suhharev joined them later and took responsibility for the technical aspect of the project.
The main function of the platform is to enable everyone to sell and buy Bitcoin.
The founders initially worked on teaching people in need of how a Bitcoin can help them in their everyday life, and later the project grew into an organized platform for buying and selling Bitcoin.

Today, Paxful is the largest peer-to-peer platform for buying and selling Bitcoin serving more than 3 million users worldwide. It’s a People Powered Marketplace.
The company proudly points out its strong business model which enabled them to bootstrap the company without external funding. The company’s growth is organic with zero investments from VC’s or any other external investors. Paxful today employs 265 employees across their offices located in New York, Hong Kong, Tallinn and Manila. Up until now, more than 480,000 Bitcoins have changed owners on the platform. If you are interested in the open positions within Paxful, you can check them here.

Paxful has the highest growth in the countries with the largest unbanked population – primarily in Africa and Asia. However, according to 2017 FDIC survey, even 14.8 million American adults are considered unbanked and about 49 million as underbanked.
The World Bank estimates staggering 1.7 billion adults worldwide were unbanked in 2017.

Remittances are the area where Paxful plays an important role in helping poor Africans and Asians.
Families in Asia and Africa that are largely supported by funds sent home by migrant workers in America are most affected. The Western Union or TransferWise’s fees are the highest in these countries. Paxful offers them a viable alternative.

If you want to send money from the United States to some African country, the process can take up to a few days if you choose a traditional way of sending money abroad.
The sender first has to go to the remittance company office within the working hours. In the majority of locations offices are closed during the weekends or at night, or the person sending the money does not have the required documents.
On the other side, imagine the scenario where African emigrants send money to their families in Africa within few minutes using Paxful.

The process goes in several steps:

This procedure can be done in under an hour easily.

However, there is a question of the cost-effectiveness if we know that most gift cards (Amazon, iTunes, eBay, Apple Store, Walmart) on the Paxful platform are sold for less than 70% of their face value. The answer to this question lies in high inflation in some African countries where there are two parallel exchange rates. The official and black market rates.

In the graph below we can see prices of gift cards sold on Paxful.

Dollars sent via Western Union to say Zimbabwe will be converted into local currency at the official exchange rate. At the same time, you will get a better exchange rate from a Zimbabwean Paxful vendor.

In Nigeria, Western Union converts dollars into local currency at the rate of 374 NGN for 1 USD while on the black market 1 USD will get you 460 NGN.
In April, the street value of the dollar in Sudan reached 145 SGD vs 55 SGD at the official exchange rate.
High inflation rates in African countries are causing large exchange rate differences, so the described method pays off in the end even with the adverse gift cards selling price.
Another interesting example where the Paxful platform comes in handy originates from Nigeria.

According to the Chinese ambassador, there is a Chinese minority of around 40,000 people. Many of these people sell Chinese goods in Nigeria and they face with a problem when they have to send money to their suppliers in China while they hold a local currency in their accounts. The restrictive money moving measures of the Nigerian state are making things even more complicated.
Here Paxful jumps in and makes it possible for Chinese people to buy Bitcoin with local currency, only to sell that Bitcoin for Chinese currency where the buyer sends it to one of the Chinese applications like WeChatPay, thus solving the problem of sending money to China in a relatively simple way.

Who are the gift card buyers?

According to one blogger, one significant group of gift card buyers at Paxful are the so-called dropshippers. Dropshipping is a type of online sale where the seller sets up a webshop but doesn’t keep the products in his stock, but instead, he purchases the item from a third party and has it shipped directly to the customer.

Thus, the droppshipper avoids investing in stocks of goods, and if he buys goods for gift cards at Paxful for less than 70% of their value – his calculation is very clear.

Ways to buy Bitcoin on Paxful

On the Paxful platform, you can buy Bitcoin via 330 different payment methods.

Payments are divided into groups according to types:

These are all types of money transfers between bank accounts. Among the most used ones are SEPA, INTERAC, SWIFT, UPI, IMPD, PayID, etc.

Paxful also offers the purchase of Bitcoin for other cryptocurrencies. As of the time of writing this article, there were a total of 36 cryptocurrencies available.
Ether, Litecoin, Stellar, Tron, EOS, NEM, Tether are just some of the well-known cryptos. This is by far the most secure way to trade on Paxful.

At Paxful, you buy Bitcoin directly from the sellers, nothing is sold by the platform itself.

From time to time you may discover unusual offers that do not fit in any of the categories above. For example, you can even sell Bitcoin for gold, as evidenced below.
There are no restrictions, if there is a demand, someone will come up with a matching offer.

Paxful does not charge any fees to customers who are buying Bitcoin, only to the sellers at the following rates:

There are also fees for sending Bitcoin from the platform:

To learn more about fees, visit this page.

From the very beginning, Paxful was constantly challenged by fraudulent actors on the platform. The difficulties are caused by the nature of Bitcoin transactions being irrevocable and non-refundable as opposed to paying by card, PayPal, or other online method that allows chargebacks. In the case of PayPal, you have a whopping 180 days from the transaction date to initiate a dispute. Of course, this asymmetry constantly inspires scammers to take advantage of the situation.

In cooperation with the specialized company Jumio, in late 2019. Paxful introduced ID verifications for all users with a trading volume above $ 1,500.

The ID verification system significantly reduces the risk and provides an additional layer of security. If you make sure to interact with a verified user that has a good reputation, you will lower your risk to the minimum. However, if a problem occurred, you can rely on Paxful’s dispute system for protection. To properly understand how to stay protected on Paxful, read this article.

Paxful in the community

Being an African immigrant himself, during 2017 Ray Youssef initiated Paxful’s Buildwithbitcoin charity project. As stated on the project’s webpage, their objective is:

“To build 100 schools, water wells and community gardens for sustainable agriculture funded entirely by Bitcoin all across emerging markets,…”

The first school was constructed and opened in December 2017 in Bugesera District, Rwanda. The second, twice as large, suitable for 300 primary school students, opened in Kigali, Rwanda in January 2019.
At this moment, the third school is being built in Machakos County, Kenya. All schools are equipped with a kitchen, a teacher’s office and solar panels in addition to regular bathrooms and classrooms. Find out all about the upcoming activities of this humanitarian project on their website.

The Paxful Platform is an excellent example of how Bitcoin and blockchain technology is changing the world in a completely unexpected way, although often far from the media and crypto community focus.