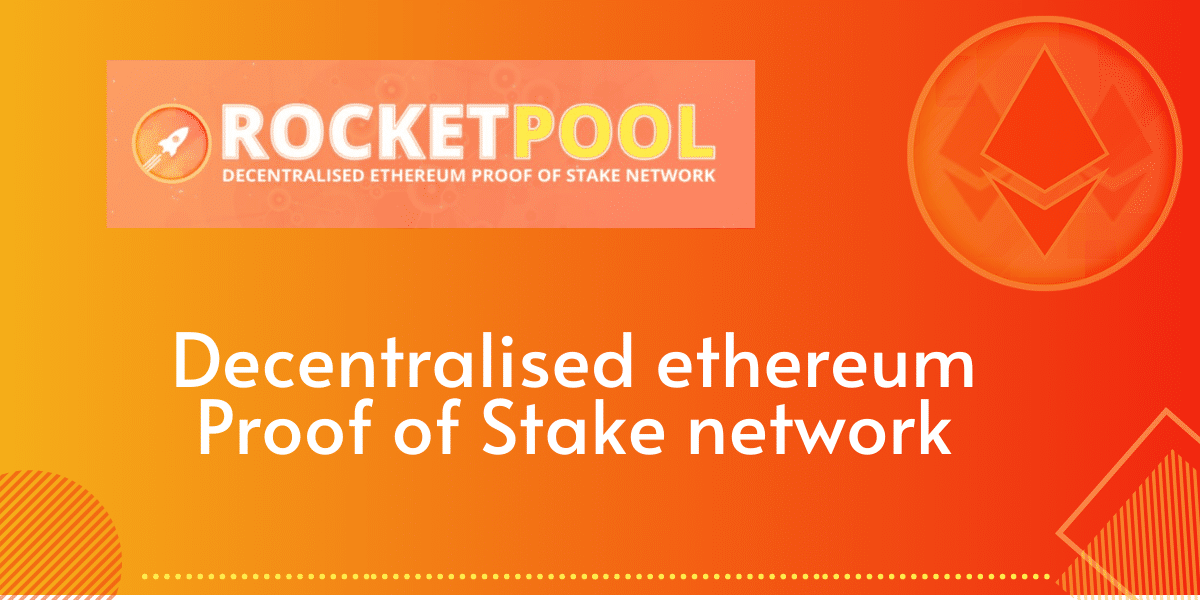 Rocket Pool is a next generation Proof of Stake Ethereum platform

Together with Bitcoin, Ethereum has the largest number of users, transactions, active developers and trading volume. Therefore, it naturally attracts a lot of attention.

In previous posts you can read how Ethereum transaction verification is done traditionally via Proof of Work (PoW) consensus algorithm in the process called mining.
The Ethereum community has decided to move from a  Proof of Work (PoW) to a Proof of Stake (PoS) consensus algorithm. This transition means that the role of miners will weaken and that staking will become the predominant way to validate transactions.
The process of switching to the PoS algorithm is carried out in stages, however the final steps are constantly delayed due to the complexity of the whole process.
According to the announcements, this year we will make significant strides in this direction.

Compared to the existing network, the new version known as Ethereum 2.0 will be much more advanced and efficient.

In preparation for the changes that follow, many teams have embarked on the development of services and platforms that will enable users to engage in a new consensus, regardless of their technical knowledge or the amount of tokens they hold.
By staking ether at some of these platforms anyone will get a chance to generate revenue.
RocketPool is one of such platforms that does this in an efficient and transparent way.

What is Rocket Pool?

Rocket Pool is next-generation, decentralized (Proof of Stake) online platform for staking ether.
It can be used by a wide range of users who can participate regardless of their technical expertise, type of hardver they use or the amount of ether available.

Rocket Pool was launched in 2016 by Australian developer David Rugendyke. Since then, the platform is under developed for the upcoming upgrade of the ethereum network.

The alpha version of the service was launched in May 2018. Afterwards, in July 2018, the 1.0 beta was successfully introduced and implemented, achieving a great success with over 1700 deposits received.
Beta 2.0 version was launched in 2019 and with more than 4,100 deposits and significantly more transactions it once again proved that the development team did a great job.
All the testing and results to date have shown that RocketPool is becoming a major player in its market segment and that it will play a central role after the transition of the ethereum network to the PoS algorithm.

In their latest announcement, the company introduced a new user interface (UI).
The new interface allows users to install software and manage all processes through intuitive control modules using just several clicks of a mouse. Interaction with the platform no longer requires coding skills nor the use of a command line interface.

How to participate in the Rocket Pool?

The core functionality of the RocketPool platform is its ability to allow anyone to participate and start generating income by staking ether. The Ethereum protocol requires the minimum od 32 ether to participate in the POS protocol. Also, certain hardware requirements as well as stable internet connection is needed.
Normally, when you decide to stake your ether and become a validator client, you are facing a risk of being penalized if your computer gets offline or disfunctional in some other way.  Also, you get exposed to hacking attacks. On the other hand, participation in the RocketPool brings you many benefits:

RocketPool will take a smaller portion of your earnings as a fee to keep the platform running. The exact amount is yet to be determined and it will depend on the network parameters. However, according to the team behind the Rocket Pool, fees will be highly competitive.

Another way to participate in the Rocket Pool platform is to install and run the Smart Node on your computer. Rocket Pool Smart Node is custom node software designed for individuals, businesses and services such as crypto exchanges, software wallets and staking pools. Interaction with Smart Nodes is performed trough an API key.

Much like an ethereum or other blockchain network, RocketPool is based on the Smart Node Network – a decentralized system of interconnected nodes that validate and secure the network.
The nodes are installed and running on the user’s computers or cloud servers.
To set up the node on your own computer, you will need to deposit a minimum of 16 ETH.  Once you install and set up a node, you will get two types of rewards: staking rewards plus node fees you collect for running a node. Fees are dynamic and will be determined via consensus mechanism between participants, similar to transaction fees for miners in the PoW network.
When running a Smart Node, you will be exempted from paying any fees for staking ether.

Similar to ethereum or any other blockchain, Rocket Pool relays on the Smart Node Network – a unique decentralized network of node operators.

Deposits and reward payments are made in rETH tokens. rETH – Rocket Pool Beacon Chain ETH Tokens – are collateralised by deposits and are in use until the ethereum 2.0 network gets deployed.

How much interest can you earn with staking ether?

As a general rule, earnings from staking ether are variable and depend on the total amount of ether staked. For more information on calculations, percentages and deadlines regarding ethereum 2.0 earnings, please visit this link.

All contracts in Rocket Pool are open source and aimed to be fully compatible with the new Ethereum 2.0 (Serenity update) as well as Beacon Chain upgrade.
It is announced that audits and bug bounties will begin soon and both smart contracts and infrastructure will be audited and tested.
After all the tests and audits are completed, the final version will be released on the mainnet. The time of a full platform launch will follow the dynamics of the Ethereum 2.0 release.

RocketPool is the leading ether Proof of Stake network with top notch infrastructure.

Its decentralized structure makes it safe and reliable while the intuitive interface makes it easy to use.
Rocket Pool enables anyone to start collecting rewards either by running a node on their computer or by staking ether, and it’s all done in just a few clicks.
Above characteristics make Rocket Pool ideal for companies, other staking pools and services such as crypto wallets and exchanges to become their clients through API key integrations.
It is worth mentioning that Rocket Pool is recognized and supported by Consenys – one of the most prominent companies within the ethereum ecosystem.

Learn more about the Rocket Pool platform mechanics in the official whitepaper.
For common questions, see the FAQ blog post.
For your inquiries fill up the contact form. All platform news and announcements are regularly broadcasted via their social profiles: