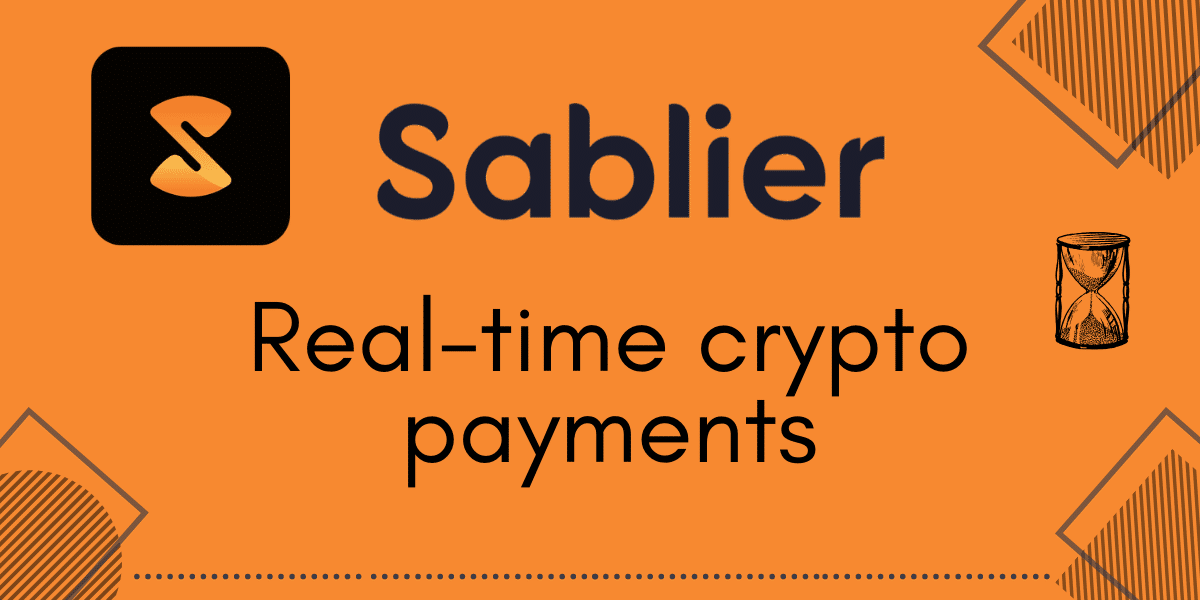 Sablier is an app on the Ethereum blockchain that enables continuous payments.

Sablier is a protocol on the Ethereum blockchain that allows continuous payments.Sablier (French word for hourglass) is a project launched in 2019 by software engineer Paul Razvan Berg. Soon after launching the project he was recognized by MakerDao and MetaCartel that secured financial and other support for further development.

To easily understand how the app works, just imagine a part-time worker hired for some job. Such a worker will usually receive his payroll after he finishes a job, or on a weekly or monthly basis.

The Sablier app allows a worker to be paid in real time, i.e. continuously while doing the job. Suppose a worker is hired for 10 hours of work and for the work done he will receive $ 100.
As a rule, he receives a $ 100 payment from his employer upon completion of his work. However, with the Sablier app the employer can deposit $ 100 in advance.
That money will then be locked in the smart contract and continuously forwarded to the employee’s account in pre-defined time intervals (days, minutes, hours, etc.).

Of course, money arrives evenly and in proportion, in accordance with pre-defined time intervals. If for some reason the worker decides to give up a job, for example, after only three hours of work, he or she will be automatically paid $ 30 for those three hours.
In this way the worker has the money earned immediately on disposal, he doesn’t have to wait until the end of the month or week to start spending it or be worried whether the employer will pay him on time.

On the other hand, the employer, after locking the agreed amount, has no further worries about paying the worker – the smart contract does the rest. On top of it, the new version of the app will introduce the so-called compound stream. In that version, the money will earn interest while waiting for payment by being deposited in the Compound Protocol.

Compound stream can be used even now if you have the advanced knowledge of working with smart contracts, while in the new version that option will be available within the user interface.

Interest rates are not fixed and depend on market conditions and the type of cryptocurrency. For your reference, at the time of writing this article, interest rate on Dai is 3% – 9% per annum. You can read more about the Compound stream here.

On the app homepage you can click on the “Open sablier” or “Use Dapp Now” button and the page will appear where you can start your money stream.

In a few simple steps you will merge Metamask or another wallet, select a token and set the amount you want, the user’s address and the time-frame for sending money.
In the pictures below you can see how we sent 10 Dai tokens from one address to another over a period of one day.

The payee can monitor the payment status in real time at the below link.

The payee can withdraw money to their account at any time by selecting the withdraw button on the user interface.

It is important to note that the sender can terminate the money stream anytime with one click.
Sablier platform consists of two main modules – module for sending payments/making money stream at https://pay.sablier.finance/ and module for receiving payments/withdrawing money at https://app.sablier.finance.
Since the first version of the Sabler platform was released very recently, for now only the basic features are available.

New 2.0 version of the Sablier platforms will be complemented with features such as:

Audit of Sablier smart contracts was performed by the company Quantstamp which issued a security certificate. The full report is available here: https://certificate.quantstamp.com/full/sablier

As with other decentralized applications, the question is to what extent they are truly decentralized and what functions are managed by administrators. This topic has been addressed in a Medium blog post. The post explains what admin rights are, directs you to the source pages and explains all the important aspects of admin keys and what can be expected in the future.
It is also important to note that in the event that the Sablier website and company become inaccessible or discontinued, users can access smart contracts directly through the Etherscan platform.

Sablier with its money streams is a brand new phenomenon and is already sparking the imagination of the community. Interesting suggestions for implementing the protocol are coming via social networks.

It’s not difficult to imagine how some form of Sablier cash flow will be implemented for paying nannies for the exact time spent babysitting, paying for parking per second instead of per hour, for payments to use of shared offices for the time actually used, various leases of vehicles, boats, real estate, content sent via online stream services, participation in events, payment of insurance, etc.
Even the issue of inheritance can potentially be solved by the Sablier protocol.
It remains to be seen in which direction the new versions of the app will go and which areas of real world usage will it cover.

Currently, the app supports about sixty different ERC20 tokens, including stablecoins as well as so-called social money private tokens, which you can read more about in the previous post.

How does the app make money?

In the current 1.0 version the app doesn’t make any profit. For the moment, the only goal is to introduce the service and to attract as many users as possible. The upcoming 2.0 version envisages two ways of generating revenue. The first is the introduction of service fees and the second is to withhold some of the interest earned from compound streams. Details of amounts and percentages are not yet known.

You can try the app today and follow the news on

If you have problems using the platform, you can contact the Sablier team via email at hello@sablier.financeFAQ

For more details how the app function, read the following page: https://faq.sablier.finance/