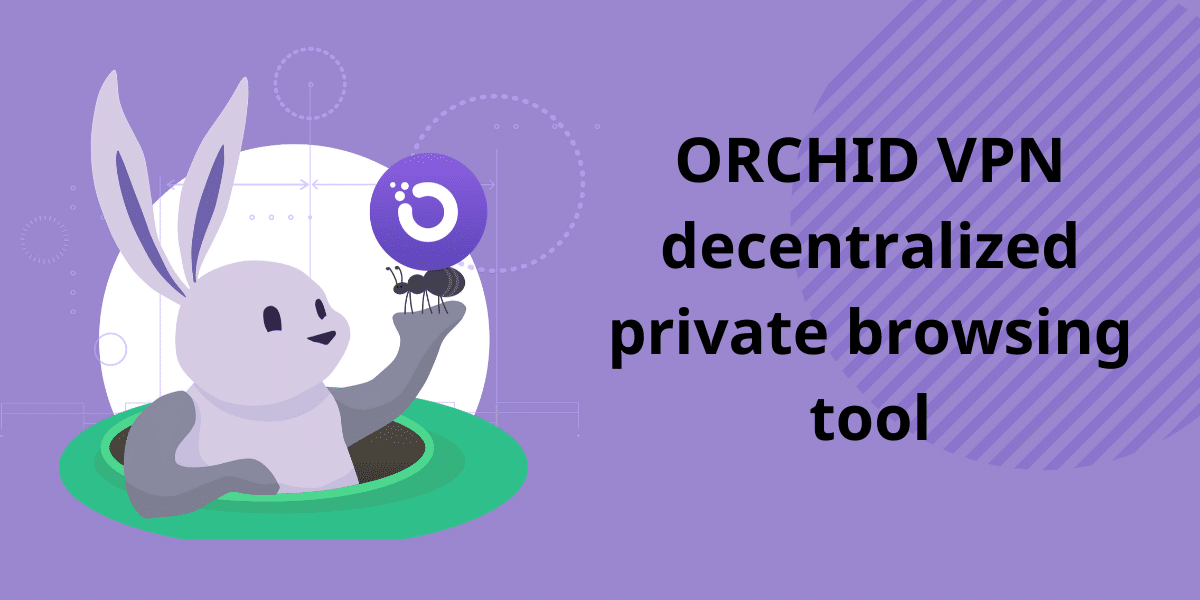 Orchid is a decentralized VPN service on the Ethereum network

VPN is short for Virtual Private Network. In practice, it is a service that offers Internet access through an encrypted connection that protects your privacy. By using a VPN to connect to the Internet, you remain anonymous on the Internet, and you are safe from data collecting. VPN hides your IP address and encrypts your network data so no one can see what you’re doing. VPN also enables you to use services that are  otherwise not available at your location.
That’s how it is supposed to work.
However, this is not always the case. There are many instances when VPN service providers have been forced or voluntarily handed over user data to a third party.
As long as there is a single point of failure – a company that provides services and has access to the user data –  there is a risk and we are left with no choice but to trust the service provider.

The Orchid VPN project offers a solution to this problem. It is a decentralized VPN service running on the Ethereum blockchain, developed using open-source tools.

Orchid VPN application is a central part of the system. It is an advanced VPN client that puts you in control over your mobile’s network connection. It’s currently available in a stable Android version, while the iOS version is still in beta. The app is also available in macOS and Linux versions. The Windows version is announced and it is still in development.
In addition to the usual network access protection function offered by other VPN services, Orchid goes a step further and offers a connection to the Internet via multiple nodes in the multi-hop route mode. This feature provides users with an additional layer of protection.

Orchid VPN protocol is purpose-built software that enables users to get connected to decentralized network resources and pay for these resources using OXT token through the Nanopayments system.

Nanopayments is the essential program that runs Orchid peer to peer bandwidth marketplace. It enables clients to pay Node operators via OXT token for proxy bandwidth.
The probabilistic design of the nanopayments enables it to scale payment throughput while lowering the transaction fees on small payments.

OXT token is an ERC20 token on the Ethereum blockchain that is primarily intended to enable users to purchase and use Orchid VPN services. After you download and install the Orchid VPN App, you will need to top up your wallet with OXT tokens so you can start using a private secure internet connection. Usage of the Orchid network is charged so that the user will pay for the exact amount of consumed bandwidth. There will be no packages.
OXT has multiple functions. OXT also serves as a staking token for Orchid node operators. Anyone is welcome to join the Orchid network and start generating income by installing and running a node on their computer. The node operators will receive a fee in OXT tokens.

OXT tokens are available at major exchanges: Coinbase, Bittrex, Gemini, OKEx, Uniswap, HotBit, and others. There is a fixed total supply of 1 billion OXT tokens, of which just over 65 million are in circulation. There will be no new tokens issued, so there is no inflation.
On the contrary, there are scenarios in which tokens are burned so the total number of tokens can only decrease over time. For more details about token distribution check the official website. You can view the OXT smart contract at this address.

Service providers of the Orchid network have special software installed on their computers, similar to other VPN networks, but developed to work within the Orchid protocol.
As described on the company website :
Orchid nodes maintain registration information in a stake registry and provider directory on Ethereum. The stake registry is optimized for enabling the Orchid app to automatically discover random servers in a decentralized environment, while the provider directory allows Orchid nodes to register metadata such as geolocation or additional services offered.

Everyone has the opportunity to stake an arbitrary amount of OXT tokens on nodes and support the Orchid network. Users select nodes according to the amount of staked OXT tokens.
A bigger staking deposit leads to higher user activity and consequently to the higher earnings. Once the tokens are staked in the smart contract, the node immediately becomes available to users. On the other hand – the reverse process takes a bit longer. Once you decide to stop staking your OXT tokens and you want to withdraw them from the smart contract you need to initiate an unlocking process that will last for three months.

The total earnings that manager will earn is directly proportional to the share of his staked tokens in the total amount of tokens staked in the Orchid system.

The prices for usage of the VPN network service are determined dynamically by the users, but ultimately they will be determined by supply and demand.
Orchid expects prices to remain competitive. An example from the Orchid website shows that 1 OXT token will get you 6 GB of service, while the minimum to get you started is as little as 5 OXT tokens. At the time of writing, 1 OXT is worth approximately $ 0.2

In December 2019, the company Certora carried out and published an audit of Orchid ‘s smart contracts, the findings of which you can read here. A few months later, in March of this year, Orchid’s smart contracts went through another audit by the expert team of Consensys Diligence. The complete report was published on its website.

Orchid’s multi-hop architecture significantly increases the user’s security by allowing the traffic to run through several routes – or hops as Orchid likes to call them.
In multi-hop mode, the user traffic is redirected across multiple nodes, drastically reducing the possibility of tracking, resembling the Tor network.
To increase its efficiency, Orchid VPN has partnered with some of the world’s leading VPN providers which enabled them to offer faster browsing speeds and fewer bottlenecks for users.
Multi-hop enabled Orchid users to configure the service to include as many hops as they want.
Also, those users that use a VPN service from a different provider now can combine Orchid nodes with those provided by the VPN service they already use to access the Internet. Read more about multi-hop on their blog.

With the combination of multi-hop traffic routing and a new decentralized marketplace with the integrated Nanopayment system Orchid provides an innovative and highly effective solution at an affordable price.
As all Orchid services are paid exclusively in OXT tokens, your personal information is never exposed. User profiles can be created via a very popular Metamask wallet. In addition to Metamask, Coinbase, Trust, and BRD wallets are also supported.
It is also important to note that you can easily share your account with someone via QR codes.
With described characteristics, Orchid VPN has become an indispensable tool to anyone concerned about online security.

The project is still in the early stages of development and only the basic parts of the system are fully functional at this time.

You can find out more about the Orchid VPN service at the official website, as well as in its the whitepaper and on Orchid online profiles:

Be sure to check out similar projects as well;